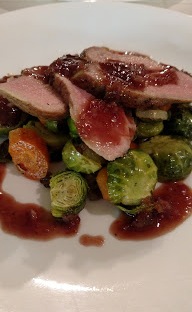 I’ve had a delightfully polyfocused weekend. Thursday, my friend and metamour Elre came over. We cooked dinner together (or, rather, I cored, peeled, and sliced the apple and ey did everything else, including searing the pork chop and prepping and roasting the butternut squash). Then we watched the premiere of Dancing With the Stars (and subsequently fanned ourselves after watching the steamiest Viennese waltz of all time). Had a really awesome time, as we always do when we hang out.

The following night, Snugglemuffinpookieface(1) came over and we cooked dinner (this time it was chili-lime rubbed steelhead trout with roasted chayote and red onion and a mojo de ajo sauce). I did most of the work, though he did supervise the cooking of the actual fish, and we went out to the dungeon for the evening. We had cherry pomegranate smoothies with whole-grain toast and cherry preserves for breakfast while the solar company inspector stomped around in my attic and on my roof.

I was really excited for Saturday night, though, cause I had plans for a slumber party with Snugglemuffinpookieface’s other partner, Hellcicle, who I’ve not spent as much bonding/alone time with as I have with Elre over the past year.

She arrived just as I’d started prepping the vegetables for the fig-glazed pork tenderloin with roasted carrots and brussel sprouts. We worked together, with Hellcicle taking over any chopping after I took three times as long to slice carrots and brussel sprouts as she would have, considering that she and our partner are professionals in the kitchen. She plated the dishes like a pro and we headed upstairs to sit casually on the sofa and eat our fine food.

My cat, Mulholland, was being extra needy of attention. He kept trying to get between us to get pets and rubs, but it was putting us at risk of getting his fur in our food. In an attempt to get him out of the way, I scooted forward on the sofa to let him pass behind me, and tried to give him a gentle nudge from behind to push him past me.

Right. So, he basically let off a spray of shit juice that splattered all over my poor metamour’s arms, shirt and lap. She sat there in shock for a moment, unsure of what had just occurred.

I sprang up to get a towel but …i mean, we’re talking cat shit here.

She set her plate down and went to shower. I picked up my phone, and texted bentSapien(2): “Mulholland sharted on Hellcicle. Other than that, we’re having a blast!”

That’s when it hit me. i picked my phone up again and sent the text:

“Dear Lover, I’m sorry my cat pooped on your girlfriend and other stories by phi-is-me.” The title of my autobiography.

He thinks it’ll go straight to the bestseller list. Hellcicle is begging me to really write it.

Polyammering is written by Phoebe Philips, a freelance blogger who writes about kink, sex, relationships, polyamory from the monogamous perspective, personal growth and politics. View all posts by polyammering

This site uses Akismet to reduce spam. Learn how your comment data is processed.